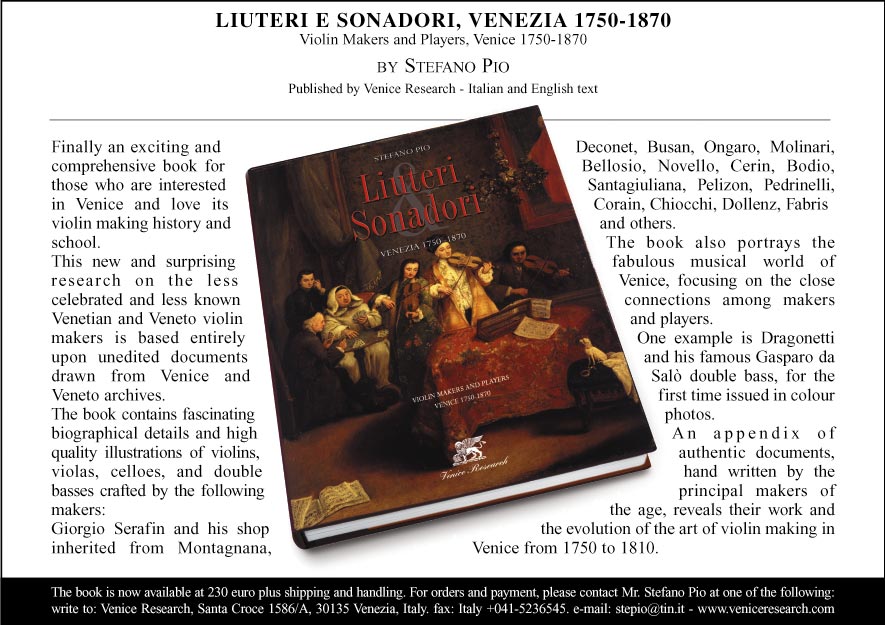 The book takes in consideration the world of venetian luthiers and also that one of professional players. There was a strong relationship between the two categories and the high quality of instruments crafted in Venice during this period is dued mainly to the cooperation existing between the two groups. Many makers were also professional player, for this reason I have analyzed the guild of makers as also of venetian players with their rule, structure and evolution, and I have titled my book " Liuteri e Sonadori" (Violin Makers and Player, Venice 1750 –1870). Many document drawn from Venice archives reveal a massive amount of unedited informations concerning famous makers and quite unknown ones.Thanks to them it has been possible to delineate the evolution of venetian luthiers. It is the first book that take in consideration the analyzed period in a complete and organical way and at the moment it is the more exaustive on this argument.

The surprises during the research have been many and of capital importance for the history and the evolution of violin making : I discovered for example ( see Giorgio Serafin life) that the Montagnana shop , the most celebrate and famous maker in Venice, continued the activity bearing his name for 17 years after his death. I have findt ( and included in the book ) the inventory of Montagnana shop as other unedited informations concerning his opera.

About Deconet, considered the most prolific venetian maker of string instruments during XVIII century, all documents findt seems to exclude this possibility: he was simply a traveling player not involved in the making of string instruments. So all the opera of this maker must be revised to the light of these new discovers.

Antonio Bagatella ( he wrote the famous manual "Regole per la costruzione de’ violini viole violoncelli e violoni" Rules for the making of violins, violas, cellos and double basses, in which for the first time are mathematically defined the measures and the relationships at the base of string instruments making ) was only the first of three members of the family devoted to the crafting of string instruments. The confusion that is associated with the name Bagatella stems from the existence of another Antonio Bagatella, his nephew, who was operative for many years after the death of grandfather.

The correct cronological collocation of many venetian and veneto violin makers is a problem focused and analyzed in the book: makers like Bodio, Santagiuliana, Molinari, Dollenz ,etc lived in different periods than stated by the principal encyclopedies referring to luthiers. The discrepancy is sometime very big: for example Bodio and Santagiuliana are reputed operative till 1832 but in fact they were still in activity on 1852, twenty years later.

Many makers were after totally unknown even if their importance in history of Venice violin making is capital: Novello, Indri, Santini and Ongaro just to evidentiate some of them. Important informations are included also on Bellosio, considered the last "classical" venetian maker: many instruments bearing his label are dated when he was only a child not involved in violin business. I discovered the important partnership he had with Novello, maker till now unknown but of capital importance for the activity in Bellosio shop and for the violin evolution as he remained operative till 1830 and was the connection between the classical and modern venetian luthiery.

I have furthermore analyzed the work of " botteghe" ( violin shops) in Venice: usually the organization of the work in a violin making workshop was far different from what the romantic culture wants us to believe. The presence of garzoni and giovani leaves no doubt as to their role and their master’s role in the production of instruments. Many workers could simultaneously intervene on the same instrument.When speaking of instruments built in Venice during the eighteenth century, sometimes it makes more sense to refer to the work of a bottega rather than the work of a particular author. This is the reason why very often during the years an instrument has been given different attributions reflecting the esthetics of the time or the sensibility of the judge, but pinpointing the authorship to one hand without considering the possibility that an instrument was created by more than one person.

Many of the principal makers of the age were employed to the four venetian " Ospedali" ( school music ):the office of liuter del loco, as it was commonly called, guaranteed a constant flow of income: curating the instruments of an entire orchestra was a burdensome activity which required the work of more than one person; instruments had to be picked up, continuously repaired because of breakage and ungluing from use, and sometimes instruments had to be built. The responsible violin maker also had to supply strings for the entire orchestra, keep an accounting book detailing all operations, and issue semi-annual or annual invoices (I have found and catalogued more than 110, totaling 400 pages). These invoices, or ‘policies’ as they were called at the time, were handwritten by the appointed violin maker and had to be approved by the maestro di cappella. These ‘policies’ are not only a precious source of informations for the study of an author and his work, but they are also a valid tool to gather more information on the activities of the Italian violin makers of the eighteenth century.

There is also much information that can be gleaned from an organological study on the musical practice of the sonadori of the time. This is the first time that such a long and articulate documentation on the activity of the violin makers of the eighteenth century is collected. For a reading of some the most interesting invoices, I refer to the appendix where some of them ( 40 pages) are listed in chronological order and cover the years from 1750 to 1810. One of the most famous and celebrated player of all ages was the venetian bass player Dragonetti " the Paganini of Double Bass". The Basilica of San Marco still preserves the Gaspare da Sal� double bass owned by Dragonetti, also a member of the Venetian sonadori guild. While there are many well-known publications on this musician and his international career, I have added some data concerning his Venetian period and also included for the first time the colour pictures of his splendid instrument which is such an integral part of the Venetian musical history . A portrait on the birth and evolution of "La Fenice" orchestra (1810 –1870) Theatre is included: many of the components were makers of string, wind and brass instruments, confirming the strong relationship thus existing with the world of liuthery. In XIX century we can see to the birth of string makers in quite all the pricipal cities in Veneto area, like Vicenza, Padova, Verona , Gorizia and Trieste. Also the principal makers existing in those cities ( Pedrinelli, Chiocchi, Pelizon, Corain, Dollez, Cardi, Marcolongo etc. ) are included in the book.